One of the costumes I wanted to make since I first became interested in historical costumes is the yellow dress from the Movie “Elizabeth” (1998), and last year I decided it was time.
The October theme for HSM2015 was “Silver screen”,  and since I acquired the perfect fabric a couple of months before I made grand plans to make the dress during the fall.

Then life happened (Jupp, baby haze), so this summer,when I finally had the energy to once more dream of pretty dresses, the yellow dress was not far from my mid.
And then when the HSM16s theme “Hero”, lined up with an growing itch to sew and grand planes for Halloween, I knew that the time had come, at last.

So lets take a look at the Dress:

It’s made in a yellow/golden brocade with a snakeskin feel to the fabric.
The bodice are stiff and ends in a deep point at center front. 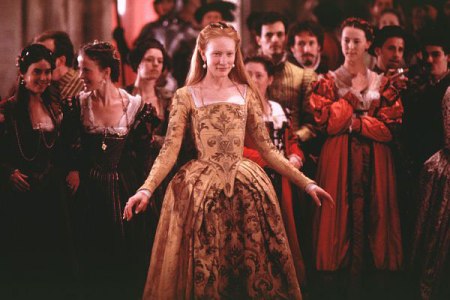 The skirt are worn over layers of petticoats and probably a big bumpad to get the hips really wide and rounded. It’s either parted at front over a identical petticoat or pleated to look like it’s open. I think its the later, which you can better see in other pics.

The line of the dress are slim and soft with a flat bodice front and rounded hips.

The skirt are pleated  to the waist all around and opens up at the back. Even though you can’t see it in this pic I’m fairly sure the bodice laces up the back (as most of the dresses in the move has this somewhat un-historical feature). You can however see the sleeves and the delicate buttons (which I later decided to leave of my version).

The neckline is square with a slight angle. 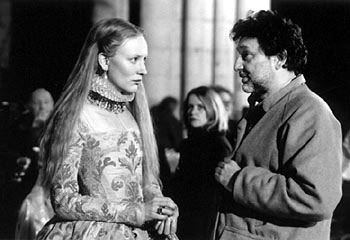 Behind the scenes worn with a neck-ruff.

The dress is worn during the coronation styled with a massive coronation robe and beautiful regalia. 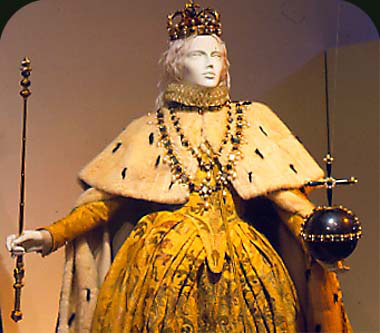 Here you can better see the pleating of the skirt and the impressive point on the bodice.

I’m actually not sure if this picture are of the movie original or if its a great copy but i’s beautiful on the les.

The painting the movie based everything of.

I reciewed some questions about how the "drop/apron" front of my black regency gown works. So here is a litle video showing how to (un)button the gown.
Black Regency evening gown.
Another fancy mirror selfie for #historymirrormonday 😉.
Thats a wrap on 4 Regency dresses finished and photographed all at once (all by myself and my self timer).📸
1805s Regency Court gown made from a see through gold embrodied tuile.
A quick litle spin in my new Regency gown.