I always find it hard to plan a full year of sewing ni adwance, since so much can happen that will change your creative drift and interest.
So this year I only made plans for the first half of the “Historical sew Monthly“.

But as summer’s now upon us I think it is time to take a new look at the uppcoming challenges, and to try to figure out what I wan’t to create for the ending of this year.

August:
Ridiculous – Make something that was considered outrageous in its own time, or is just utterly ridiculous to modern eyes.

There are SOoo many things yuu could do here, like 1880s bustles, 1890s mutton-sleeves, 17th century trunkhose ore 1830s hairs (already done that:-).
But for this challenge I will try to finish my Robe a la Franchaise that I begunn in 2014.

It’s not silly looking per se, but the panniers that it will go over are a bit cazy

September:
Seen Onscreen – Be inspired by period fashions as shown onscreen (film or TV), and recreate your favorite historical costume as a historically accurate period piece.

I’ve been wanting to make myself some more 17th century garb and now might be a good oppurtunity to get to it. 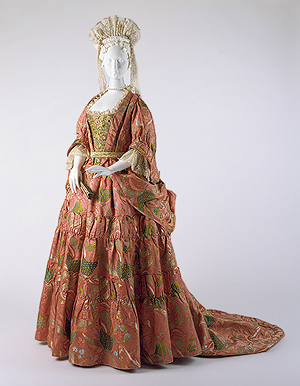 October:
Out of Your Comfort Zone – Create a garment from a time period you haven’t done before, or that uses a new skill or technique that you’ve never tried before.

This one is hard, but I’ve been wanting to give menswear a fair try, so why not now.

I already have a Regency west cut and waiting, and if I can find the time I would love to also make a pair of breechers and a shirt.

November:
HSF Inspiration – Be inspired by something that has been made for the HSF over the years to make your own fabulous item.

There are so many gorgeous and inpireing entrys to the HSF/HSM, that it would be almost inpossible to choose only one.
That I think I will approach this from the other angle – to decide the garment first, by going through my stash and then find the right inspiration from the comunity.

December:
Go Wild – You can interpret this challenge as an excuse to make something that incorporates animal print, or wild animals in some way, or to simply make something wild and over the top.

I also been craving an 15th century Burgundian gown for myself, and since those often are decorated with fur, it would be the perfect choise.

As you sure can guess, I’m planing a lot more costumes this year, 3 of which are already well on their way, that don’t fit into the scheduel that is the HSM.