The first thing I needed for my Borgia dress was a new chemise.

I wanted one with lots of floowy fabrics and huge sleeves to pouf through the holes in the outer dress. Not as fancy as this one, but in the same style.

And since a chemise is basically made out of squares, I didn’t use any pattern but used sketches like this one and the one in “The Tudor Tailor” for reference.

I used a thin cotton voile, and sewed the whole thing on machine using the french seam as a seam finish.

The whole thing went together pretty fast, and I would have made it in one night if I hadn’t messed up and inserted one of the sleeves inside out.

And not only had I set it inside out, I only noticed it after I french seamed the heck out of it.

that seam should really be on the inside…

I briefly considering leaving it that way (it’s underwear after all, No one is going to see it), but then I decided to fix it right away to be able to finish that same night.

After some hesitation and trying to unpick the tiny stitching, I decided to just cut the whole thing of and start over again.

Cutting the seam allowance, to re-set the sleeve.

Said and done. I re-set the sleeve, finished the neckline (with a cord for gathering) and started to steam the finished chemise for photos.

Then I realized I re-set the sleeve in the exact same way as before – INSIDE OUT!

I almost burst into tears right then and there.
But after I managed to collect myself (a process involving frenetic searching through the kitchen for chocolate and getting some hugs and toothless smiles from my baby) I decided to put the project on hold for the night.

It took a few days but when I once more got some time for sewing I bit the bullet and re-set the sleeve once more, thus finally finishing it of. (And you can’t even tell that the shoulders now uneven) 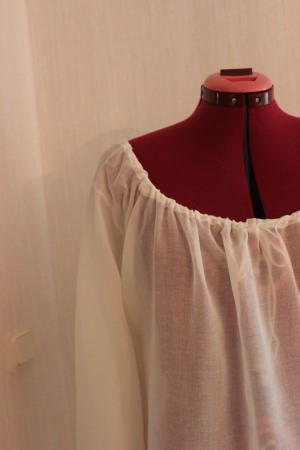 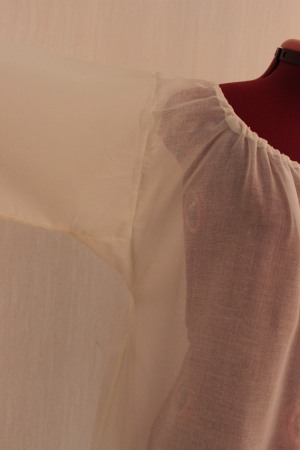