After finishing the skirt (and the Lady Mary dress) I continued on to the bodice on my 1850s summer dress.

Using some green cotton from my stash I draped a pattern on my dress-form trying to get as close to the original shape as possible.

Then I cut it out, stitched it together and tried it on. 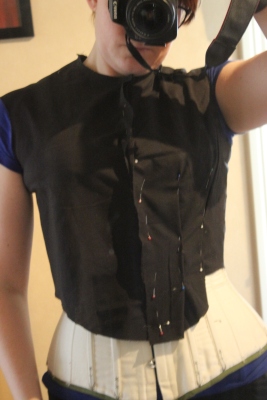 bodice with pinned darts on one side.

I pinned the darts while wearing the mock-up. Then I took it of, marked and stitched them shut.

And put it on again for one more try to see if i got it right.

Then I altered the pattern, taking out a few millimeters at every seam to make it a tad smaller, and shortened the back bodice about a cm to make it end at the waist.

And on to cutting out the pattern. 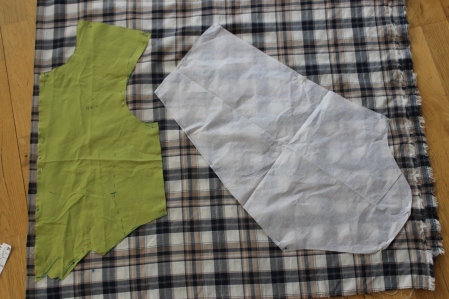 The pattern matching took a while, but whit lots of patients and pinning, I did get it right in the end.

Then I basted the bodice pieces to the interlining (who also served as lining).

center back being basted.

I stitched the center back seam,but was not happy with the bad matching of the pattern.

So I ripped out the seam and used three times as many pins as usual to really get the fabric to lay still while sewing (I could just have basted, but was to lazy at that point). 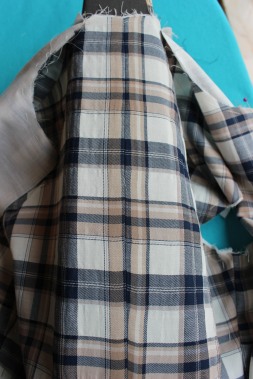 The result was much better, still not perfect, but I figured it wouldn’t show that much once worn.

Then I marked, pinned and stitched the darts on the bodice front piece copying the markings from the mock-up.

Then it was once more time to lace o the corset to check the fit.

Looks good. the only thing I needed to change was to shorten the back length some more. The vertical crease at the shoulder blades is a consequence of my corset, and will disappear as soon as I get the back boning in.

I really love the look of the bodice at this stage.

Trying it out with the right underwear…

I used the pattern piece from my pattern draping, now cut in the plaid cotton, and pinned it to the dressform.

My only problem now was to decide if I really wanted the draping or not.

I loved the clean look of the un-draped bodice (and it would be so much easier and faster to finish), but my I think it was the draping who made me love the inspiration dress so much.