This weekend it was finally time for my 19th century group to visit the big “Titanic Exhibition“. I’ve been pending between super stressed and super excited these past weeks, working non stop with finishing and perfecting the dresses for me and my sister to wear.

And I made it. Everything was ready in time. Although blisters on my feet did stop me from wearing my new Gibson shoes (stupid, stupid, stupid me, wearing bright new high heels the day before a big event). I will never do that mistake again.

I really enjoyed meeting some of the members from our costume group, and looking at (and envying) everyones beautiful dresses. The weather was sunny – in fact it was too sunny. We were all toasting in our corsets and petticoats.

The Exhibition was wonderful and we had such a lovely time walkig around, looking at and listening to the fascinating stories of the real people who lived and died when the Titanic sunk.

We were not allowed to take any photos inside the exhibition, so instead I will show you some which I found online. 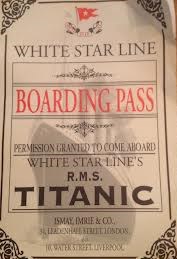 Unfortunately we did not get the chance to walk down the big stairway, but had to settle for just looking at a painting of it. Even though the picture was beautifully made.

We did however walk down the first class corridor to the cabins. That was amazing, you could almost feel the “boat” rock beneath your feet and I did even get the impulse to grab the rail.

The settings of the different rooms were really detailed and nicely done. It was in a room such as this the telegraphs sent the distress code CQD and SOS out into he night, continuing all the way until their little booth was flooded.

What I found most interesting was the cross-section model of Titanic, which let you see all the little rooms and corridors. I could have stayed there for hours looking at the little people walking the deck or having breakfast in their suites.

Some wood working tools used to make the ship.

Pictures of families and spauses travelling to the new world.

Trinkets and letters found on the numerous dead bodies.

The (tiny) necklace that is said to have inspired James Camerons Movie “Titanic” (1997).

Photo of survivors taken from the rescuing ship “Carpathia”.

But the most moving piece in the exhibition was when you turned a corner and suddenly stood before the names of all those who lost their lifes during the sinking. Men, women and children – all died in the freezing water.

This was a beautiful and well executed exhibition and I think everyone who is the least interested should go visit it. It was much bigger than I would have thought, yet intimate and really let you get close to the objects. The voice in the headphones was interesting and informative yet left room for your own thoughts aswell. It made you really think.

Besides walking the corridors of Titanic in our time typical clothes we also had a meeting and interview with the local paper. We talked about our clothes, the costuming community and everything concerning 19th century from Napoleon to the suffragets.

The news crew was allowed to take some photos of us inside the exhibition.

By the main stairway. 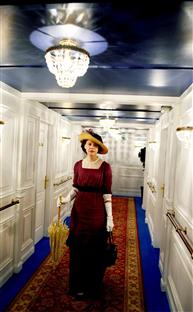 Walking down the first class corridor. 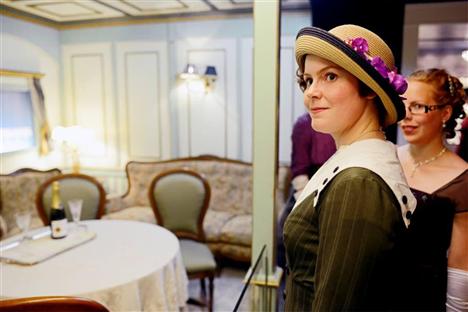 Looking at a first class apartment.

And then some of my own pictures from that day. 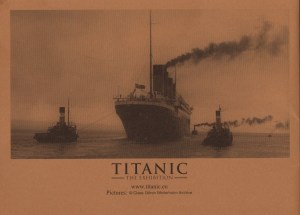 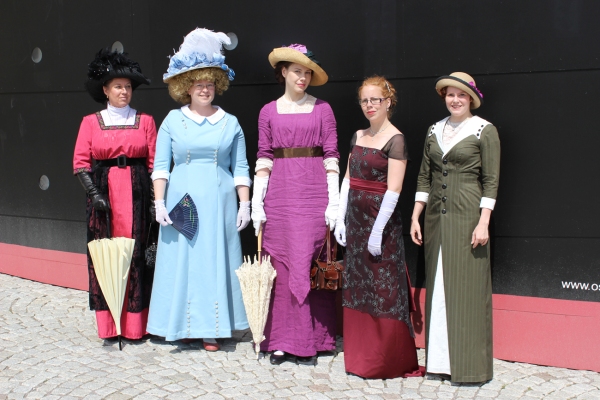 Look at those accessories. Fans, gloves and gorgeus hats.

I’m  in love with her umbrella. Damn those hobble skirts, or else I would have made a run for it….

We did get quite the attention, and by-passers stopped to look. 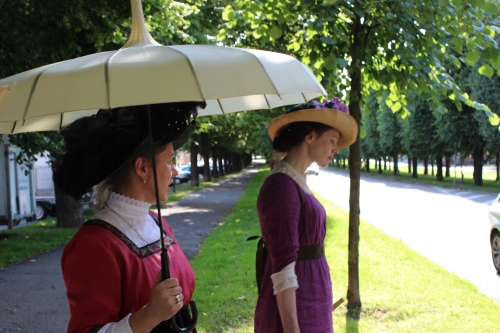 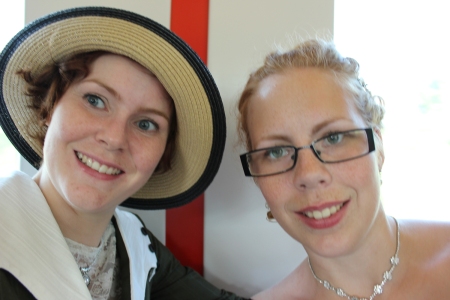 Two happy but tired travellers on the train home.

One thought on “Titanic – A Jurney to the past.”