Wow, It’s already been more then a month since the spring ball (and summer arrived) but I just now finished my blogpost about it.

As you might recall, I had quite a bit sewing done before the ball, both for me (1825s bonanza)
and my sister (a whole 1860s costume with underpinnings and everything).
Thanks to good planing (he he, right;-)) I managed to finish everything in time,
and didn’t even have the panicked last minute finishes that always seams to be my lot.

The day of the ball was a bit hectic though.

As I needed to turn the mandatory dance rehearsal down, in order to get to a friends babys christening instead.
But since I still had my sisters dress at home, I had to make a pit-stop at the dance-hall to leave it to her, before I stuffed my (relatively) clean baby in the car and drove 1 hour to get to the church. After a quick stop, leaving our present, and eating some cake I rushed home to get dressed in record speed for the ball.

My outfit ready and awaiting.

Thank good my boyfriend (who happened to have a book-release that same day) had already come home, and could take the baby and help me close the dress.
Even more thank good, I’ve already done the dress-rehearsal (or more exactly the hair-rehearsal) so I managed to get the hair done and the dress on in not more then 30 minutes.
Beat that!

Does this lok like a fast and easy hairdo?

Arriving (in time) to the ball, I had some time to calm down and to find my sister.

Hiding out by the fire-extinguisher

The evening started with a mingel and everyone admiring everyone else dresses/costumes. 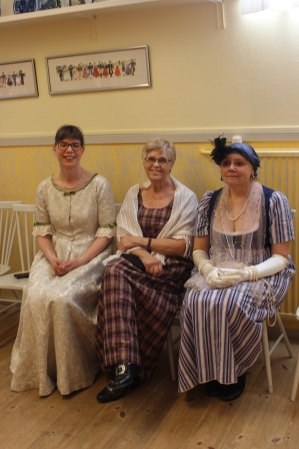 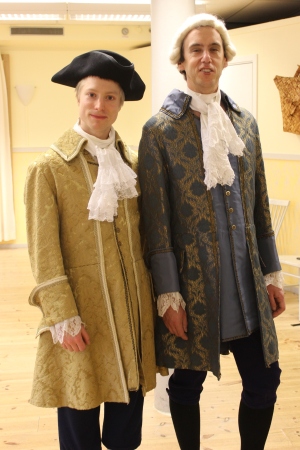 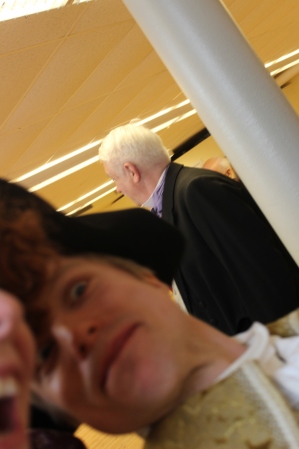 Beautiful girl – terrible lighting…
I’m not kidding, this is how bad the lighting is in the dance hall.

Pretty bows on the shoes 🙂

Then it was time to head upstairs to get some dinner.

unfortunately me and my sister dragged a bit behind to take some silly pictures, and once we got upstairs there was no seats left.

They managed to get out a few extra chairs for us, but since all tables was full, we was seated on the table flanks far away from each-other.

The dinner started with a soup made from peas, which was really good.

The main course was basically beef, chicken and bacon combined.

As a vegetarian there wasn’t to much to eat, unfortunately.

“Can we pleas call for a pizza, cause I’ve only had some cake since breakfast…”

During dinner one gentleman got up and started singing an “humorous” old song, which was kind of musing, at first, but 78 verses in I was not the only one rolling my eyes at the (inappropriate old sexist jokes in the song and) man taking up to much space. 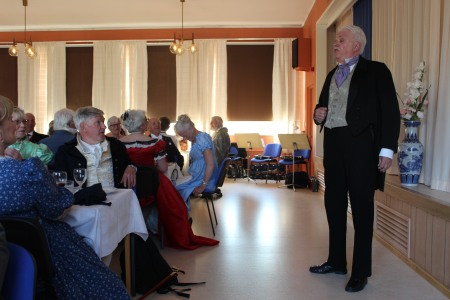 Once we finished the dinner I took the opportunity to take some picture of pretty dresses while the tables cleared to make room for the dance. 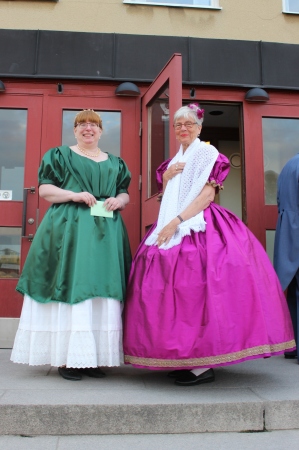 Then it was time to dance 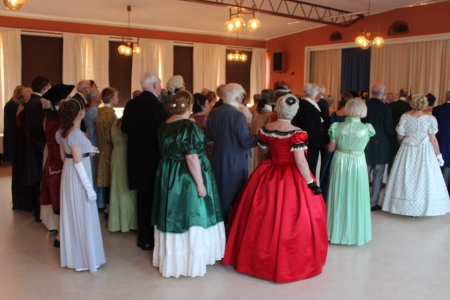 We had one break for dessert later in the evening

Then the dancing continued

Somebody knows how to pose…

Then it was time to say goodbye and go home. 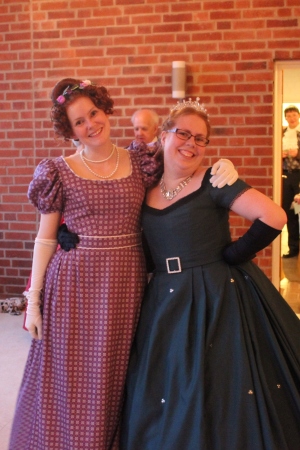 I had lots of fun dancing and fooling around with my friends, making some new friends as well, but to be both hungry and really tired made me a bit cranky at the end.
At least I got lots of compliments for both my hair and my dress(es) 🙂

Our local 19th century comunity (which I'm a part of) did an article about me on their webpage. You can read it at www.1800.se (in Swedish)
Still working on the pleated decoration for my 1879s natural form era spring suit.
April continue to test our patience and once again brings on the snow, so here is my Regency Bridgerton dress again.❄
I've had the honor to test @virgilsfinegoods new 18th century dress pattern during the spring.
Things are moving along on my 1879s striped springdress.
#throwbackthursday to 9(!) Years ago when I tried a bit of a 50s look.