By now it’s been two weeks ago the annual cultural festival in our town.
And just like last year me and my dance team was there to do a little performance.

This year the theme/time period on our dance was “Anything goes” or “All decades unite” to promote the upcoming Ball with the same theme.

I had some trouble deciding on what to wear (such a luxury problem, right), but in the end I decided to wear my new 17th century outfit. Mainly because I (correctly) guessed no one else would be wearing 17th century, and because I really wanted to try it out properly, to decide how I felt about it (stomacher and all)

The weather was perfect (maybe even a bit to hot), and the stage had been set up in the perfect spot in the middle of the park, with lots of market booths and activities close by to help draw audience to us.

The performance went well, even though all our memorys was a bit rusty after the summer break. 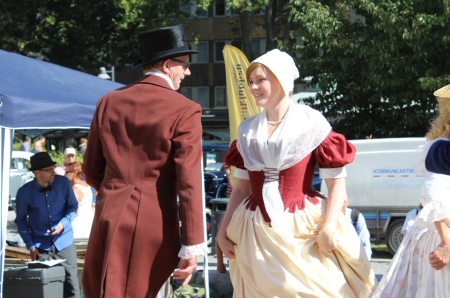 I used my thin fichu to cover my scooping decolletage from both uncomfortable eyes and the scorching sun.

Between the shows we had a short break to watch the other teams dance, and to take a short turn at the market (where we handed out information about our ball) 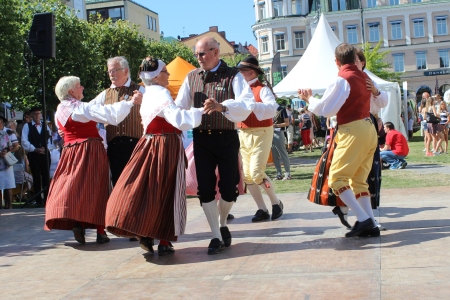 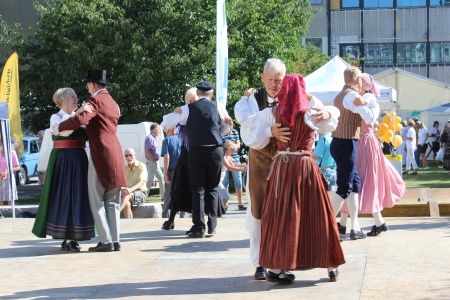 The historic dance team’s resting in the shade.

Carl and Shakila from my sewing course, sporting medieval and 1850s evening wear.

We performed right beside the old cars exhition. 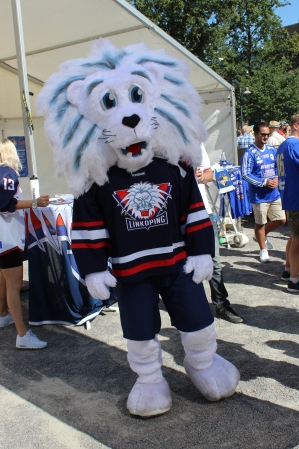 Before it was time to go home I got a few minutes to talk (and take some photos) with my childhood dance teacher Katarina.
I joined in her kids folk dance team at the age of 6, continued as assisting dance teacher at age 15, and still frequent the same summer dances, festivals, and barbecues. 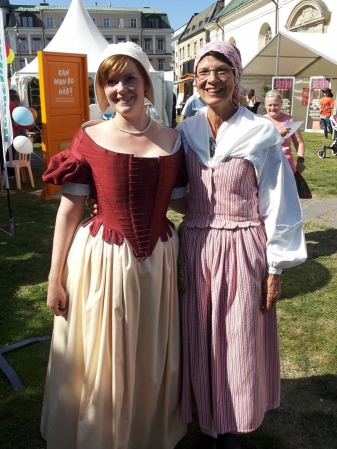 I totally adore this woman.

Once home again, my fiancé helped me by taking some photos of my outfit (sans the fichu).

After the day ended I can truly say that I really love this costume.
I felt so pretty and stylish in it, the shape it gives me and the way it makes me feel really petite and like an Amazon at the same time is just so great (sorry, can’t describe the felling any better)
But I must admit it was quite a relief to get home, unlace and put on some sweats…
(I’m curently working on some big plans for this costume…)