When the HSF Challenge 15 – White, was announced I decided to make an Edwardian S-shape corset (about 1900s) and maybe a chemise. But at the moment in all the crazy Francaise a la merteuil and Anglaise of satin trouble I had to much on my mind to really take the time to think about it and make a plan.

And then the “Titanic exhibithion” showed up, and I suddenly needed to get myself a 1910s corset instead.

You may think that there’s only a smal differens in shape in the 10 years, but look at this…

For this challenge I actually did my research and took the time to look at, and read about the range of 1910s corsets out there.

After studying some pattern and pictures I decided to use Waughs under bust “1909 corset” patten.

I drafted and changed the pattern to fit my shape and then cut a mock-up.

It fitted surprisingly well, and only needed to be lenghten at center back, and taken in a bit on the hip and butt – so I’d be able to adjust and tighten it even more over the bum.

I searched the stores for some white on white brocade but had to settle for this cotton/polyester blend. 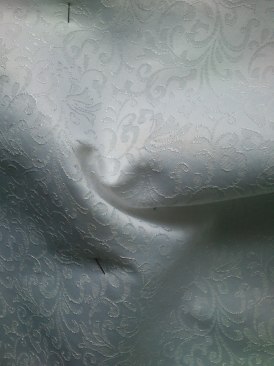 Altough beautiful I think it’s too white, almost hurt the eyes. And with the polyester content I didn’t want to try dye it to soften the color. So – bright white it is.

I used ordanary cotton fabric for interlining and lining. And cut them all out as one.

Bias tape boning chanales from the inside.

And from the outside.

I used heavy duty cable-ties for boning the corset, and some metal pipe-cleaners for the lacing in the back. 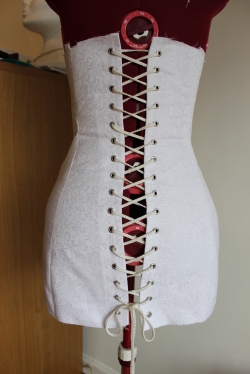 I made some bias-tape out of the same white cotton used for lining to cover the upper and lower edges. And as a finishing touch I added some white lace.

Since the rules of the HSF states that an entry can’t be finished more than 1 month before the challenge is due, and I needed to use this corset more than 3 weeks before. I deliberatly left out the suspenders of the corset and only sewed them on until the very last minute, hence finishing it whitin the time limits. 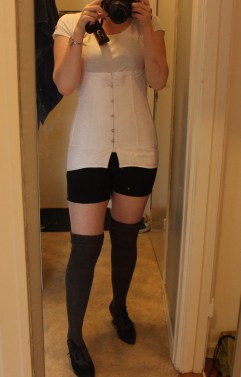 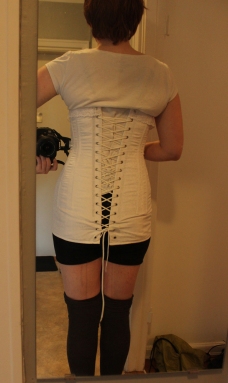 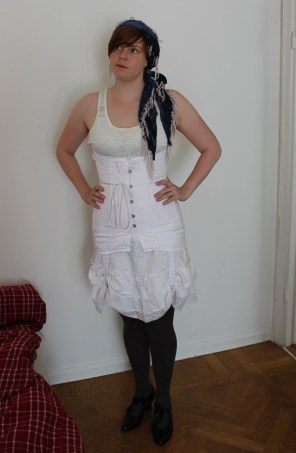 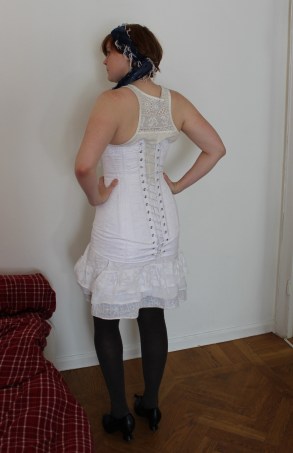 How historical accurate: Sewing machines was in use during this period, and the pattern and silhouette and color are correct. The polyester thread, fabric and lace are not. So I say 50%

First worn: On the photoshoot begining of July, and then on the Titanic exhibition the day after.

Final toughts: After shortening the front boning about 4cm it became much more comfurtable and I could even sitt properly in it.

I also have some problems figuring out how to attach the suspenders to the socks without messing up the petticoat.